Never7 -The end of infinity 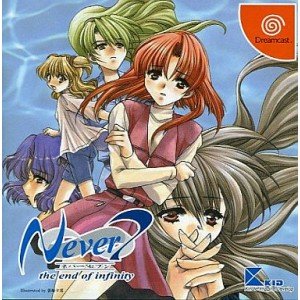 A month after the release of INFINITY cure., the Dreamcast remake of infinity was released. Instead of infinity, the Dreamcast version was titled Never7- the end of infinity. The title “Never7” was chosen for its meaning “never become 7,” referring to how due to the infinite loop, Makoto could never reach April 7th, as well as how all seven cast members could never all stay alive, while “the end of infinity” referred to “ending the infinite loop.” In addition to the original ending of Izumi Curé, Never7 included an additional ending known as the Curé B Ending (renamed to the “Izumi Curé Normal Ending” in the PSP release), made from a desire of the staff to include a shocking “twist ending” in the vein of the recently released The Sixth Sense. These two endings were created to juxtapose each other – while the Curé A ending leaned towards the supernatural solution being correct, the Curé B ending leaned towards the Curé Syndrome solution being correct.

A new vocal ending theme was added for Izumi Curé titled “Treasure Dream,” composed by future 5pb./MAGES CEO Chiyomaru Shikura and performed by Tomoko Kawakami. Izumi Curé was also recorded by the same voice cast as Never7, and due to the larger disc space of the Dreamcast’s GD-ROM, the voice acting was able to be included without notable voice compression (though voice acting for all pre-existing infinity content remained compressed). Oddly enough, however, Saki did not have any new voiced dialogue in the new content of Never7, with any new scenes featuring her using recycled audio and dialogue from infinity. The infamous Izumi Route was instead delegated as a bonus, non-canon route unlocked after viewing the epilogue for Izumi Curé. Also, if a player put the game’s GD-ROM into a CD player, a gag audio skit between Yuka and Kurumi played, as part of a well-known tradition for games at the time. Furthermore, Never7 made use of the Dreamcast’s VMU add-on to allow players to view how they were progressing in their relationships with the heroines. The game also added 23 additional CGs to events that previously did not feature any.

Meanwhile, Yuka Cure was delegated not as part of the main game, but as a side-story used as a sample to sell KID’s new unique feature to fans: the Append Story system. Originating as a concept for a separate “Visual Novel Maker” game in the vein of titles like RPG Maker for KID, where players could create their own visual novels and freely distribute them via network (out of a personal desire from KID’s higher ups to do something unique with the Dreamcast’s network features), KID’s programmers quickly realized the concept would have required far too much time and money to accomplish. It was then thought it should be turned into a game where players sent their own scenarios to be turned into visual novels, but thought that system would have little appeal. So instead, it was added to Never7. With the Append Story system, players could write up their own fan-written scenarios (essentially fanfiction) and send them to KID. If approved, KID’s staff would take that scenario and put it through scripting and coding, and once a week, they would release one of these scenarios online. Players could download these scenarios through their Dreamcast and play them. The genres of the scenarios widely varied from serious to humorous, taking advantage of the story’s loop gimmick and deliberate ambiguity to justify them. Around this time, KID released several of their setting documentation for players in order to write scenarios with consistency towards the main story. The system was a huge success, and while the exact number has been lost, roughly 50 scenarios were written and released through this system. The system was a hit with players, and as a result, saw continued usage in KID’s future Dreamcast titles, most notably Memories Off 2nd and My Merry May until the system was eventually discontinued around the time of development of Ever17 -the out of infinity- due to the increasing complexity of the settings and stories of KID’s titles. The final result was a generally positive release. In addition to the pre-existing praise for the content retained from infinity, Never7 received high praise for the Izumi Curé route, as players were reportedly very surprised and thrilled by the game’s sudden venture into thought provoking science fiction territory, and for providing a much more satisfying ending. And while the game’s sales ultimately did not exceed Memories Off as its staff had been hoping, it ultimately was a greater commercial success than infinity, giving the game a reputation as a “hidden masterpiece.” However, there were still a few complaints, notably over several lingering mysteries that remained unanswered, and the heightened presence of typographical errors found in Izumi Curé compared to the other routes. However, Nakazawa and Uchikoshi remained unmoved in their stance towards the lingering mysteries, wanting to leave them up to interpretation to invoke fan discussion. The official Never7 site FAQ reflected this view, and years later, Nakazawa would say that each route had its own truth, and there was no singular overarching answer (a view that would be elaborated on in the PSP version). 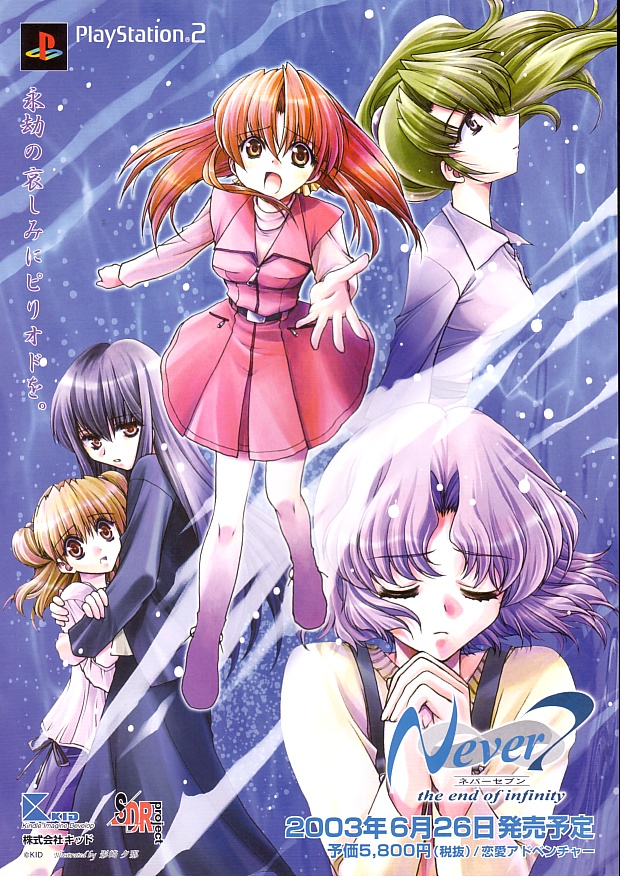 After its release, Never7 was ported to a variety of consoles. First, following the footsteps of Memories Off, it was given a PC release in 2001, containing most of the content of the Dreamcast version, though lacking some of its extra features and requiring to have the game’s soundtrack CD in the PC’s disc drive in order to play the game’s BGM (this version was also included with the 2008 Infinity Plus bundle made to commemorate the release of 12Riven -the psi-climinal of integral, and a separate reprint of the PC version was also released at the same time). Another PC version was released in China in 2002 under the title Shiguang zhi Yao, or “The Wheel of Time.” In 2003, the game was ported to the PlayStation 2, featuring a remixed soundtrack and polished interface. Though the Append Story system had already been discontinued by this time, the majority of the pre-existing Append Stories were also included with the PS2 version. While the PS2 version was planned for a release in South Korea and even had a finished localization, the publisher withdrew from the PS2 market just before it was set to release, leaving the project permanently shelved. 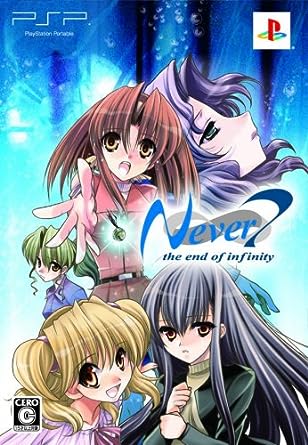 In 2009, a PlayStation Portable version of the game was released, developed by Regista (comprised of several former KID staff members, including Nakazawa) and released by Cyberfront (who owned the rights to the Infinity series at the time). Using the PS2 version as a base, this version of the game contained a new opening movie, new opening and ending themes by the band ASRIEL (“Treasure Dream” remained the Izumi Curé ending theme), and the addition of the “TIPS” glossary system that was first introduced to the series in Remember11. These TIPS, written by Nakazawa, shed some further light on the game’s characters, setting, and pseudoscience, clarifying the game’s stance on its deliberate ambiguity. The game’s gallery also featured a collection of promotional art that had been produced for the game over the years.

Years later, a digital version of the PC version would be released on Cyberfront’s online shop GameLiner, and even offered the game free in late 2011 to promote the release of Code_18. In August 2012, an iOS port of Never7 was released, included with a calendar, calculator, and several minigames. Both of these releases were eventually recalled when Cyberfront declared bankruptcy in 2014. Afterwards, MAGES acquired the rights to the Infinity series, and in 2015, a digital version of the PC release was released on their online shop Magino Drive, where it remains to this date.